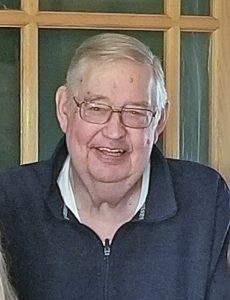 Michael W. Anderson, age 77, of Gilman, died Saturday, May 9, 2020 at his home in Spring Valley, WI.  Michael was born December 1, 1942 to Wallace and Gilga (Krause) Anderson in South St. Paul, Minnesota.  He grew up and attended school graduating with the class of 1960 from South St. Paul High School.  In that same year, he joined the US Navy, serving on the USS Dewey DLG-14.  He was discharged in 1963 earning the Good Conduct Medal.  Michael enjoyed a lengthy career at 3M beginning in 1966 until retirement.  He was a loyal employee taking on various leadership roles.

On October 29, 1966 he was married to Irene Aebly in South St. Paul.  Together, they had 4 children, Theresa, Sandra, Brenda and Jeffrey.  In 1975 they moved  to Spring Valley, Wisconsin where their family enjoyed working together on their small hobby farm. Michael and Irene’s pride and joy was their family.  Michael was a devoted husband, father, grandfather and great grandfather.  As his grandson said, “The favorite part of Grandpa’s day was hearing about yours.”

Michael had many hobbies, some of which included working on his family genealogy, trying out new recipes, reading, gardening, tinkering in his garage and watching wildlife.

Michael is preceded in death by his parents and sister, JoEllen Christensen (John).