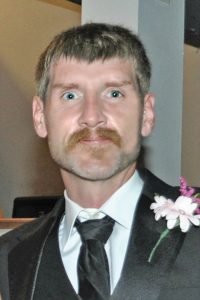 Darrin Wayne Plantz was born in Mobile, Alabama on February 6, 1972. At six years old, he was adopted by his forever family in Denver, CO. In 1978 the family moved to Colfax, Wisconsin. When he was 17, he moved to Iowa City, Iowa to be with his girlfriend, who later became the mother to his daughter. Darrin loved to talk about his daughter and how proud of her he was.

Darrin earned his HSED, and lived most of his life in Iowa. Darrin was proud of his work as an electrician. His dad instilled a strong work ethic in his youth. He then was mentored considerably by his employer, Mike Homewood, of Homewood Electric in Iowa City.

Darrin was a dreamer and a free spirit. Life led him to Clearwater, Florida, where he loved the beaches. He made sure to express that he didn’t miss the cold winters of Iowa. Due to Darrin’s nomadic lifestyle, he would occasionally have stretches without much family contact, but he always found his way home. Darrin recently reconnected with his Colfax family and his sister, Nora Mae in Nevada. The family was thrilled to be in contact with him again, enjoying many Messenger conversations and a few video chats. Darrin often volunteered at Countryside Cares Helping Hands Food Pantry in Clearwater, FL. He was proud of his work there and grateful for their assistance. He passed away unexpectedly on Sunday, February 9, 2020.

Darrin was preceded in death by his paternal and maternal grandparents, several aunts and uncles, and his dear sister, Bridget. He is survived by his daughter, Autumn (Jake) Burroughs, of West Liberty, Iowa and three grandchildren, Ashton, age 16, JayLyn, age 11, and a baby to be born in March. He also leaves behind his parents, Greg and Dorothy Plantz of Colfax, WI, sister, Nora (Nick) Fletcher of Pahrump, NV, sister, Michelle (James) Valdez of Pueblo, CO, and several aunts, uncles, nieces, nephews and other relatives.

You made it home before we did, Darrin. Leave the light on for us. We love you and miss you.

Services will be held Tuesday, February 25, 2020, at 5:30 p.m., at Grace Baptist Church, 11591 17th Ave, Chippewa Falls, WI 54729 with Pastor Bruce Schmidt officiating. Visitation will be for one hour before the service. A private burial will be conducted on Wednesday.

If you desire to honor Darrin’s life, please consider a donation to Helping Hands at https://www.countrysidecares.com/helping-hahorahnds/ in lieu of flowers.