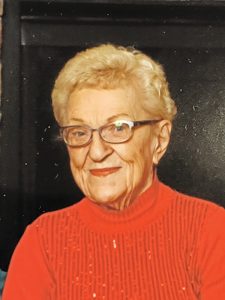 Gloria was born February 4, 1924, to Samuel and Ruth Lien in Amery, Wisconsin. She grew up in Amery, WI, and graduated from Amery High School in 1942.

Gloria married Chuck Bille, of Clear Lake, WI, on February 19, 1944 in Shreveport, LA.  After his discharge from the Army they moved to Colfax, WI, where they founded and owned Commercial Testing Laboratory.  In retirement they traveled extensively and enjoyed deep sea fishing at their home in the Florida Keys and hunting at their homes in Wisconsin and Arizona.

Left to cherish her memory are her children, Vickie (Ed) Good of Iron River, WI, Charles, Jr. (Carol) of Duluth, MN, Teresa Olson of Port Wing, WI, Marcia Block of Hendersonville, TN, and Todd (Lenore) of Rochester, MN.; 12 grandchildren and 18 great grandchildren.  She is preceded in death by her husband, parents, and eight siblings.

A family memorial service and burial will be held at a later date at the Northern Wisconsin Memorial Cemetery in Spooner, WI.

Gloria loved animals; her family requests that any memorial donations in memory of Gloria be made to your local animal humane society.