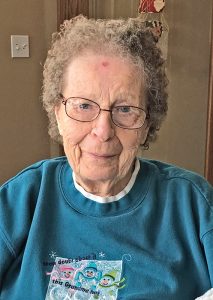 Carol was born December 27, 1924 in Stanley, WI to George and Alice (Darsow) Rank. Carol married Willard Tape on June 21, 1941 in Boyceville, WI. Together they had 6 children. Carol enjoyed life to its fullest. She enjoyed making crafts, doing projects around the house, making bridesmaid dresses, canning and spending as much time with family and friends. Carol spent many years bowling which she was very good at. Carol and Willard owned and operated the local bar in Boyceville called Tape’s Town Bar.

Funeral services will be held 11:00 Thursday, January 30, 2020 at Trinity Lutheran Church in Boyceville, WI with Reverend Bradley Peterson officiating. Burial will be in the Tiffany Cemetery in Boyceville, WI. Friends may call at the Anderson Funeral Home in Glenwood City, WI on Wednesday, January 29, 2020 4 to 7 p.m. and one hour prior to services.