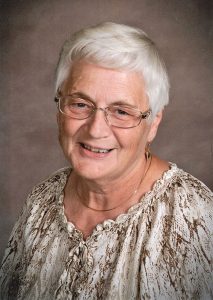 Karen was born on November 7, 1945, in Eau Claire, the youngest of eight children, to Melvin and Helga (Johnson) Hendrikson. She grew up in Colfax and was a survivor of the June 4, 1958 Colfax tornado. Karen was confirmed on May 15, 1960 from the North Running Valley Lutheran Church in rural Colfax. She attended Colfax Elementary and High School, and graduated with the Class of 1963. Following high school graduation, Karen moved to Minneapolis and began employment with Title Insurance Company.

On November 13, 1965, Karen was united in marriage to Ronald Halvorson at Colfax Lutheran Church. They lived and worked in Minneapolis until November of 1969, at which time they returned to the Colfax area. Karen became a stay at home mom and thoroughly enjoyed her children, gardening, yard work and being close to her family.

In 1982, Karen and Ron began their own business, Creative Marble Products. She remained in the cultured marble business until her retirement in 2007, working side by side with Ron.

Karen loved spending time with her grandchildren. She took pride in her home and loved working on immediate and extended family genealogy. She was very proud of her Norwegian heritage. She was proud of her parents and was forever thankful for the way she and her siblings were raised by them.

She was preceded in death by her parents; 2 sisters, Margaret (Clayton) Prill of Bloomer, and Carol (Morris) Gustum of Sand Creek.

Memorials can be made to the Colfax Lutheran Church in her memory.

Funeral services will be held at 11 am, on Saturday, January 25, 2020, at Colfax Lutheran Church, 601 River St., Colfax, with Rev. Leslie Walck officiating. Visitation will begin at 10 am (one hour prior to the service) on Saturday at the Church. Burial will be held at a later date in Evergreen Cemetery, Colfax. Sampson Funeral Home is assisting the family with arrangements. For online condolences, please visit www.sampsonfuneralhome.com