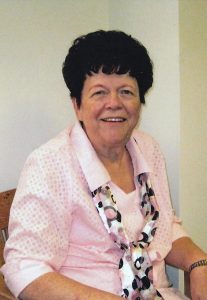 June A. Micheels, age 81, long-time resident of Ridgeland, WI passed away Wednesday, January 15, 2020 at Comforts of Home Memory Care in Menomonie, where she has resided since 2014.

She was born June 14, 1938 in the town of Arland, WI to Carl and Selma (Anderson) Bergstrom. As a young girl, she lived on a farm in rural Barron County, where she was active in 4H. She was baptized and confirmed at First Lutheran Church of Arland. Her family moved to Prairie Farm and she attended Prairie Farm High School and graduated in 1956. She went on to attend Wisconsin State College – River Falls (now UW-River Falls) majoring in English and earning her teaching certificate. She began her teaching career at Grantsburg High School in 1960. Soon thereafter, she accepted a position at the Prairie Farm School District where she taught high school English and served as the librarian until she retired in 2001. She was actively involved in the Forensics club and directed numerous plays as the advisor for the Drama club.

June married Roger Micheels (d. 1990) on August 15, 1964 at St. Paul’s Lutheran Church of Prairie Farm. They moved to the Micheels farm and June lived on the farm until 2014. Prior to having kids of their own, they hosted two foreign exchange students from Mexico, Patty and Cecilia. June and Roger had two children, Neil and Eric. June was actively involved in her children’s activities, traveling around western Wisconsin to attend basketball, baseball, and football games. She was often found under her umbrella lending her vocal support to Neil and Eric’s teams. She enjoyed reading, cooking, and sewing.

Thank you to Comforts of Home for six years of loving care and to Mayo Hospice for assisting in her final days.

She was preceded in death by her husband, Roger; her parents, Carl and Selma; her sister-in-law Imogene Micheels and her brother-in-law Patrick Kane.

Funeral Services will be held at 11:00 a.m. Wednesday, January 22, 2020 at St. Paul’s Evangelical Lutheran Church, Township of Prairie Farm, Barron County, with Rev. Roger Quandt officiating.  Burial will take place in the church cemetery.  Visitation will be from 4:00 p.m. to 7:00 p.m. Tuesday at Olson Funeral Home in Menomonie and also one hour prior to the services at the church on Wednesday.