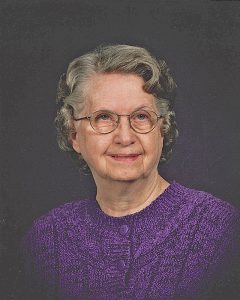 Norma, age 92, of Knapp, WI passed away peacefully at The Neighbors of Dunn County in Menomonie on Monday evening, December 30th, 2019.

She was born on August 9th, 1927 on her home farm in rural Boyceville to Floyd and Leona (Schlough) McIntyre. She attended Midway Grade School west of Boyceville and graduated from Boyceville High School in 1944.

After high school graduation, Norma worked for the National Bank of Boyceville. In May of 1955 Norma married Melvin Slind after he was discharged from the Navy. They had two sons, Jeffrey and John. Sadly, Mel passed away in August of 1959 following a battle with cancer. After Mel’s passing, Norma and the boys lived with her mother and father in Boyceville. She was always grateful for this time with her parents and that she was able to help them as well.

In June of 1967, Norma married Eugene Williams in Boyceville. The family lived in Menomonie where they had a son, James. Their marriage later ended in divorce.

Norma enjoyed time spent with her family and friends. She was a life-long member of Trinity Lutheran Church in Boyceville. In her earlier years, Norma was very involved in teaching Sunday School, serving meals at church events, and the quilting club. She loved music, especially Lawrence Welk. We also learned that she rather enjoyed dancing in her earlier years.  Norma loved baking for family and friends. Her pies, cookies and cinnamon rolls were favorites!

She was preceded in death by her parents, husband Melvin, brothers Wilmer and Doug McIntyre, and sisters Ione Csuti and Janet Gazinski. Norma also recently lost a son, John Slind, in February of 2019.

Memorial Services will be held at 11:00 a.m. Saturday, January 25, 2020 at Olson Funeral Home in Menomonie with Pastor Brad Peterson officiating. Visitation will be one hour prior to the service. Burial will be in Hay River Cemetery, Township of Hay River, Dunn County at a later date.

In lieu of flowers, donations in Norma’s memory can be made to Trinity Lutheran Church in Boyceville.