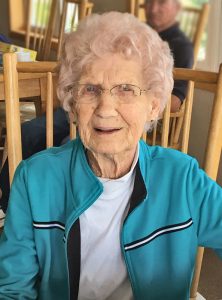 Margaret was born June 26, 1924, in Glenwood City, WI to Leon and Camilla (Myny) Swanepoel. Following her education in Glenwood City, Margaret married Lawrence Klinger in June of 1942, and they farmed and she worked for several businesses including Sanna Dairies in Menomonie, WI, and Friday Canning in New Richmond over the years.

Following Lawrence’s death in 1956, she later married Robert Standaert in November of 1957.

She was a life long member of St. John the Baptist Catholic Church in Glenwood City.

Margaret is preceded in death by her parents, husbands Lawrence and Robert. Son Stephen. Brothers Bill, Frank and Emil Swanepoel.

She is further survived by many nieces, nephews, other relatives and friends.

Mass of Christian burial will be held 11:00 a.m. Monday, December 30, 2019, at St. John the Baptist Catholic Church in Glenwood City with Father John Long as celebrant. Burial will be in the church cemetery. Friends may call at the Anderson Funeral Home in Glenwood City, WI on Sunday, December 29, 2019, from 4 to 7 p.m. with prayer services at 7 p.m. and one hour prior to services Monday at church.