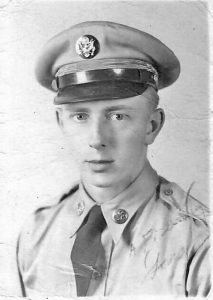 Gary L. Yokes, age 85, died peacefully on Sunday morning with his family by his side at his residence in Kiel.

Gary was born on April 17, 1934 to the late Lawrence and Patricia (Anderson) Yokes. He was a graduate of Colfax High School, graduating with the class of 1952. Gary joined the U.S. Army after high school. He served as a Security Specialist and served in Okinawa during the Korean War. On April 6, 1957 he married the love of his life, Gloria Ackley in Colfax. After his service in the Army, he started his own business as a CPA, which lead him to Milwaukee where he was employed for many years as a Business Manager for Marquette High School. Gary retired from Our Lady of the Lourdes Catholic Parish’s in Milwaukee.

Gary was an active member at Christ the King Church, Kettle Moraine Curling Club, the National Rifle Association as well as the VFW Post. He was an avid outdoorsman, enjoying his time hunting and fishing. Gary also enjoyed his time on the open road with his motorcycle, or could be found on his moped. He enjoyed spending time with his family, especially at the Curling Club, golfing and taking care of the horses. He was a wonderful family man for 62 years. Gary could also be found watching golf on TV or a Green Bay Packer game.

He is survived by his wife of 62 years: Gloria; two children: Robin (Kerry) Campbell, Wyoming and Bryan (Yvonne) Yokes, Hartland; four grandchildren; six great-grandchildren; a brother: William (Ruth) Hoyt; a sister: Kaye (Don) Dickman. Gary is further survived by his sisters-in-law and brothers-in-law, nieces, nephews, other relatives and friends. Gary was preceded in death by his parents and a brother: Gayl Yokes.

Per Gary’s wishes, cremation has taken place and a memorial service will be held at 1:00 PM on Saturday, December 14, 2019 at Meiselwitz Funeral Home (815 6th Street, Kiel). Burial will follow at SS. Peter and Paul Catholic Cemetery, Kiel with Military Honors accorded by the Kiel VFW Post #6707.

The family will greet relatives and friends at the funeral home from 12:00 PM until the time of service at 1:00 PM on Saturday.

In lieu of flowers, a memorial will be established in Gary’s name for the local Humane Society.

The family would like to give a special Thank You to Dr. Ben Dellaria, Calumet County Hospice, and the Homestead Care Center. They would especially like to thank Kevin Voland and all the other close neighbors and friends for their kindness and friendship over the years.