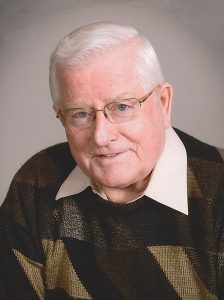 Allen G. Andrews, age 82, of Boyceville, WI was called home to be with the Lord and his beloved wife Marlys, on Monday, Dec. 16, 2019 at Mayo Clinic Health System in Eau Claire, surrounded by his family.

Allen Grant Andrews was born Oct. 11, 1937 in Colfax, WI to Ned and Tinka (Hendrickson) Andrews. He was baptized and confirmed at Our Savior’s Lutheran Church in Wheeler and graduated from Colfax High School.

He married Nancy Decker and they later divorced.  On Nov. 27, 1976, Allen married Marlys (Bilse) Benitz at St. Paul’s Lutheran Church in the Township of Prairie farm.

Allen worked for the Dunn County Highway Dept for 37 years, retiring in 1994.

He enjoyed hunting, fishing, camping, gardening, playing cards, many trips to Branson, MO, and he especially enjoyed spending time with family.  He was also an avid Packers and Brewers fan.

Allen was a kind, compassionate and generous man who will be deeply missed by his family and friends.

Funeral services will be held at 3:00 p.m. Sunday, Dec. 22, 2019 at Trinity Lutheran Church in Boyceville, WI with Pastor Brad Peterson officiating.  There will be visitation at the church from 1:00 until the time of the service.  Burial will be in Our Savior’s Lutheran Cemetery in the Town of Hay River, Dunn Co. WI at a later date.