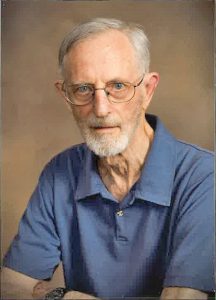 Richard Arnold Wood, 85, of Glenwood City, WI, passed away peacefully in his sleep on Saturday November 16, 2019.

Dick was born on August 2, 1934, in Spring Valley, WI to Florence (Traynor) and Arnold Wood. Dick graduated from Spring Valley High School in 1952. He attended College at UW-River Falls in the field of education. He took a break from school to serve his country in the U.S. Army from 1954 to 1956. He resumed his studies and graduated from UW-River Falls. Dick married Kathy (Gross) on June 29, 1957. They were blessed with a family of four girls. Dick taught in River Falls and Baldwin before settling in Glenwood City. While in Glenwood City Dick taught History, he also coached football, wrestling, and track. He also received his Master’s Degree and became the High School Guidance Counselor, which he held until he retired. He later married Linda Troutman. Dick enjoyed camping, woodworking and spending time with his family.