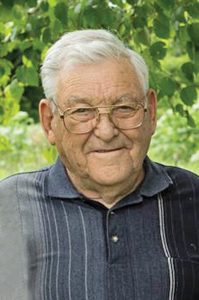 Edwin Morris James, age 89, was born in Connorsville, Wisconsin on January 16, 1930, the sixth child of Clyde and Leora (Stone) James. Edwin went home to be with his Savior at Luther Hospital in Eau Claire, Wisconsin on Sunday, September 29, 2019, as a result of complications following a farm accident in August.

He was raised on a farm south of Downing, Wisconsin but his family moved to a different farm a few miles away when he was 15 years old. This became his home place for the next 74 years. When he was in his junior year at Glenwood City High he dropped out of school to take over the work of the family farm. Edwin was a dairy farmer at heart and loved to work the land, watching crops grow and then harvesting them. He especially loved horses which, as a boy, he used to pull a homemade wagon and later, as a family man, to give sleigh rides in the winter and buggy rides for family, friends, school classes, senior citizen outings, and in parades.

Edwin loved anything with wheels which he could ride on and work with on the farm. In 1952 Edwin joined the United States Army and served as a Sergeant in Korea. While there he was awarded the Bronze Star for bravery in action during a bloody night battle.

When he returned home following the cease fire, he married Ardyce Schutz on October 23, 1954. They began attending Grace Bible Church (now Grace Baptist Church) of Boyceville that year and had a special heart for ministering to the young people. They were involved in the young people’s activities and served as youth Sunday School teachers. Edwin loved music and was also involved in the music ministry at church.

God blessed Edwin and Ardyce with five children and with a family-owned business (Eddy’s Livestock Service) which provided for their needs through the years. Edwin served on the Glenwood City school board for 30 years, many of which he was president of the board.