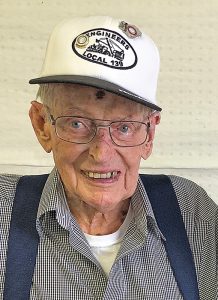 Phillip F. Rose passed away at Colfax Health and Rehabilitation Center on September 11, 2019 in Colfax, WI at the age of 92 surrounded by family.

Phil was born on July 22, 1927 in Elk Mound, WI to William and Emma (Stobb) Rose. He attended Oak Hill Country School and later graduated from Colfax High School. He married the girl from across the road, Twylia Gotlibson, on September 2, 1950. As a young man, he jumped a freight train with his childhood friend, Millard Sorenson, to work as a teamster driving a mule team. Phil drove school bus for the Colfax School District from the late 1950’s to the mid-1960’s. He cleared gas line right-of-ways near Ellsworth in the 1960’s. He worked at American Materials for 23 years. He also ran a small family farm with Twylia from 1950 and remained on the family farm until his death.

Phil enjoyed cutting wood for the oil burner at “The Thornapple Hilton” with the Prince boys. He loved to garden and watch the Packers. He will forever be remembered as a man devoted to his family, a dedicated farmer, and a proud union member.

A Funeral Service is scheduled for 11 a.m. on Monday, September 16, 2019 at Colfax Lutheran Church, 601 River Street, Colfax, WI with Pastor Leslie Walck officiating. A visitation is scheduled between 4 p.m. and 7 p.m. on Sunday, September 15, 2019 at Sampson Funeral Home, 1017 E. Railroad Ave., Colfax, WI and again one hour prior to the funeral service at the church. All are welcome to attend and celebrate Phil’s life. The family would like to thank Mayo Hospice and Colfax Health and Rehabilitation Center for their care in his final days.