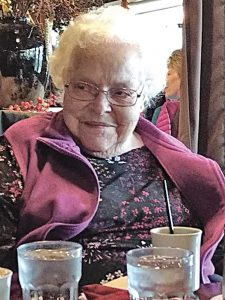 Shirley Irene Jasperson passed away peacefully on Tuesday, August 27, 2019 surrounded by family in Menomonie, Wisconsin. Shirley was born on October 19, 1929, in Somerset, Wisconsin, to Oscar and Lilah (Redlich) Rivard. She graduated from Somerset High School in 1947 and married Francis Jasperson on November 6, 1948. They lived in Gary, Indiana, for 2 years then returned to New Richmond to farm. In 1962 they moved to Glenwood City where they farmed. Francis passed away in 1972 leaving Shirley to raise 9 children which she did very successfully. She provided her children with many experiences that taught them skills and gave them confidence to make their way in life. Shirley had a warm smile and she touched many lives.

Shirley is survived by her 9 children: Tom (Lu) of Glenwood City; Bill (Rose) of Star Prairie; Joyce (Ron) Hoffman of Colfax; Tim (Diane) of Deer Park; Ann (Roger) Knabe of Mason; Sue (Russ) Aszmann of Colfax; David (Jodie) of West Bend; Ron (Becky) of Durand; and Rick (Lynn) of Hudson; as well as 24 grandchildren and 16 great-grandchildren. She is also survived by her brothers: Richard Rivard, Stewart Rivard, Harold Rivard, and Jim Rivard all of Somerset as well as many nieces and nephews.

Shirley was preceded in death by her husband, Francis; her parents; one brother Donny; three sisters: Dorothy Gleason, Audrey Lindeau, and Lorraine Wickenhauser; and one grandson Nathan Aszmann.

A Celebration of Life will be held on Saturday, September 14 from 11 a.m. to 3 p.m. at the Glenwood City Community Center.

The Anderson Funeral Home of Glenwood City is assisting the family with arrangements.