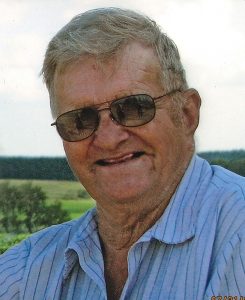 Allyn Edwin Churchill came into this world on May 30, 1927 and passed away on August 21, 2019. He was born to Edwin Churchill and Bertha (Jacob, Churchill) Beseler at his home in Beaver, Minnesota.

Allyn attended school up to the eighth grade in Beaver, MN. He married Eva Catherine Ellringer on April 9, 1947 and farmed his entire life. After marrying Eva, they rented a farm near Plainview, Minnesota, then later purchased a farm near Weaver, Minnesota. Their final destination in Minnesota was a farm up Whiskey Hill on Honeynut Ridge. In 1958 they purchased the farm where they currently reside in Downing, Wisconsin. As Allyn began to slow down, he always managed to keep an eye on the farm. He especially loved seeing the family dogs, Bandit and Lucy.

Funeral Services will be held on Tuesday, August 27, 2019 at 1:00 P.M. at Trinity Lutheran Church in Boyceville, WI with Pastor Brad Peterson officiating.  Burial will take place at Tiffany Cemetery in Boyceville following the service.  A visitation will take place from 11:00 A.M. to 1:00 P.M. prior to the service at the church.  Olson Funeral Home in Menomonie is serving the family.