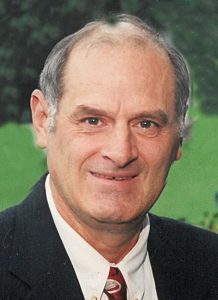 Ronald Raymond McCarthy, 74 years of age, passed away August 11, 2019.  He was born to Raymond and Ruby (Nyhus) McCarthy.  He helped on the family farm and graduated from Glenwood City High School in 1963.

He married Lynda Wadsworth in 1965.  He was drafted into the Army in 1966 and served active duty in the Vietnam War where he received commendations from General Omar Bradley.  After his honorable discharge they lived in Edina, MN for a short time before moving back home to Downing WI where they would raise their family Brian McCarthy and Lisa (McCarthy) Smith.  He was a very active member of Trinity Lutheran Church in Boyceville WI, serving on the church council and assisting them with the build of the new church.  He coached younger kids football while he was in the Army and was the Defensive Coordinator for the Boyceville High School football team in the 80’s, where all the players called him “Ropes” because of the vigorous exercises he made them perform during practice.  He worked at Gabbert’s Furniture Store’s warehouse in Edina restoring furniture and making service calls for 45 years.

After he became divorced, he moved to the Twin Cities where he married his current wife Katharine in 2002.  They continued to live there until he passed away.  They enjoyed traveling and spending time with friends.

Ron enjoyed model railroading, fishing, being at the cabin, watching sports (and when younger playing football and slow pitch softball), scoping out garage and estate sales, and being around family and friends.  He especially enjoyed sharing his love for trains and fishing with his grandsons Eyan and Riley McCarthy.

He was a generous and hard working man who will be missed by many.

He is survived by wife, Katharine; daughter Lisa (Brian) Smith; son Brian (Krisi) McCarthy; grandsons Eyan and Riley McCarthy; sister Sue Strehlo; and brother Jim (Carol) McCarthy.  He is further survived by nieces, nephews, and many other family and friends.

A gathering will be held August 15th from 4 to 8 p.m. at Holy Cross Lutheran Church in Glenwood City, WI.  Services were held at 11 a.m. Tuesday, August 20th, at St. Stephen Lutheran Church Bloomington, with visitation one hour prior.  Burial will be at Fort Snelling August 20th at 2 pm.