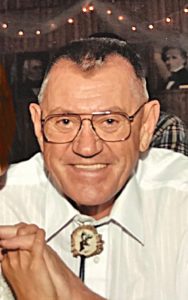 William Joel “Billy” Arndt, Jr., age 83 of Clear Lake, WI, formerly of Deer Park, WI, passed away peacefully with his family by his side on Saturday, July 13, 2019 at the Golden Age Manor in Amery, WI.

William Joel Arndt, Jr. was born on January 7, 1936, in Deer Park, WI, the son of William Arndt, Sr. & Elsie (Henke) Arndt. He grew up in Deer Park, WI, attended New Richmond schools and graduated from New Richmond High School in 1954. Bill joined the United States Air Force in 1955, served as a military police man at Pease Air Force Base at Portsmouth, NH and was honorably discharged in 1958. He was married to Therese Marie Gaudet at Sacred Heart Catholic Church in Laconia, NH on August 16, 1958. Together they made their home in Deer Park, WI and raised five children, Sandy, Debbie, Ronald, Pauline, and Valerie. Over the years, Bill worked various construction jobs and at the Domain Feed Mill in New Richmond, WI. He later became owner and operator of Therese’s Bar in Forest for 17 years. In his spare time, Bill enjoyed hunting and fishing and was a member of the Amery Gun Club. He also enjoyed playing cards and traveling, taking many trips to pan for gold in Alaska. Bill will be sorely missed by his family and many friends.

He was preceded in death by his parents, William & Elsie Arndt; sister and brother-in-law; Delores (Burley) Kohn; and brother, Gary Arndt.