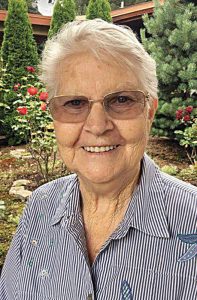 The third daughter of Herbert and Marian (Peterson) Drinkman arrived during a vicious snowstorm, much before the doctor, with the assistance of a midwife. The doctor drove behind a snowplow and climbed over snow drifts in the driveway to get into the house. Nine of her siblings were born on this same farm, two later were born at a maternity home and hospital.

Her determination for arrival, positive outlook, and optimistic attitude remained with her during her life and later, as she left this world to join her husband. She knew where she was going. She was ready and happy.

She grew up on the farm, about 8 miles north of Downing, WI. She attended Downing Grade school and Glenwood City High School. She was the first of the family to venture out to the “cities” to look for a job, sharing an apartment with many other girls from WI. Merlee and Ila remained close friends with Joan through the years.

While working in the city, she met Jan Hesselink, they were married June 3, 1955. They worked and lived on a dairy farm near Baldwin, WI, for 11 years. During this time, three of their four children were born, Gary, Lynette and Steve. In 1966 they moved to Washington, living first in Carson then buying a house in Stevenson, WA. Lisa was born and the family was complete.

Joan operated a day care for 18 years, over 150 children grew up with her faithful and meticulous guidance. Joan loved every one of these precious little gifts from God. Her warm and giving spirit will be remembered by all who pass through her door.

In 2014, Joan and Jan made the decision to move into Parkview Christian Retirement Center, in Portland, OR. They enjoyed life and made many new friends. Jan died in 2017, sadly missed by many, especially Joan. Her health deteriorated slowly but surely, this year she moved to the assisted living building of the Center. Despite her pain, suffering and hospital visits, she remained in good spirits. She always had a smile for those who crossed her path, never lost her quick wit of words and never lost her positive attitude. Joan is now in the presence of our Lord and Savior.

A memorial service, in Joan’s honor was held on Sunday, July 28th, at the River Christian Church in Stevenson, WA. Internment will be in the Willamette National Cemetery, Portland, OR.

Joan and Jan, together forever, RIP!