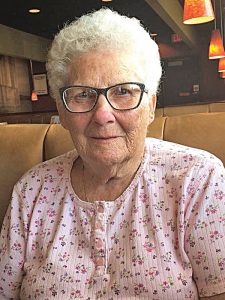 Diane Ruby (Gaustad) Jeske, 84, of Glenwood City, WI went to be with her Lord and Savior Jesus Christ on Saturday, July 20th at her home surrounded by her family. Diane was diagnosed with colon cancer on April 10th, 2019. She battled the cancer as long as she could and never lost her spunk, the sparkle in her eye, or the smile on her lips. She was a friend to many and that showed in all the visitors that she had.

Diane was a woman of great faith and she and her husband Bernie shared their faith with their daughter LuAnn Jean (Steve) Scharmer, her granddaughters Heather Lynn Jeske and Jill Diane (Arthur) Adams and Jill’s children Ryley Otto and Gabi Otto.

Diane was happiest when she was surrounded by her family playing Yahtzee (and taking 4 shakes if no one was looking), playing the nickel game (sitting between Ryley and Steve so they could give her bad cards), or when camping she was a fierce competitor when playing Polish horseshoe. She had a favorite red hat she wore to keep the bugs off her head and across the front it said RIP U. So we have called her Rip or Ripper for years.

Years ago she hardly ever missed any of Heather or Jill’s school sports games, and always rooted them on loudly from the bleachers, and the last few years she has attended Gabi and Ryley’s games and was always the loudest person in the crowd cheering them on. Gabi would smile at Gramma Di from the volleyball court when she got too loud, and when Ryley was running the football in for a touchdown he would hear Gramma Di yelling “Go Ryley go! Several years ago it seemed there was always a game of 500 going on at Grandma and Grandpa Gaustad’s house. There were some arguments over those 500 games too. Gram was our biggest fan in what ever we were doing. She was known to cuss a bit now and then, and then pretended it slipped out.

She drove bus for nearly 50 years. She loved her bus route kids like her own and made sure they were always safe. Those “kids” would bring their own kids out to her house for Trick or Treating, and if she saw them on the street there were always hugs exchanged. She loved spending time with or talking on the phone with her three sisters Marlys, Charlene and Janice. These ladies loved one another dearly and fun and laughter was had by all when they were around you. Plus some sing alongs singing old songs that they learned years and years ago.

Diane was active in her church, St. John’s in Boyceville over the years until it closed. She had wonderful friends from the church that stayed in touch over the years. Diane loved to sing. She loved country music and often sang along to the songs on the radio. She also sang in the church choir. But as she aged she lost her singing voice. But last week laying in her hospital bed in the living room of her home we all gathered around her and we all sang with her,  one of her favorite songs, Softly and Tenderly Jesus Is Calling. She sang and it was beautiful.

Diane took great pride in her lawn and spent endless hours on her mower and weed whipping over the years. She also plowed her own snow with Bernie’s 1987 Dodge truck up until last year. She handed over the keys to the truck to Ryley this spring. He loves that truck as much as Bernie did. She loved holidays especially Easter. She would hide chocolate eggs in the house and we would have to search for them. She colored real eggs and hid them outside. When you found your own egg you could search for the Golden Egg with $5 in it! She loved Christmas too. She used to decorate almost every room in the house. Every time she saw a sale on lights she would pick “an extra set” up! There are dozens of boxes of lights of every color in the basement that have not even been opened.

Funeral service will be held 11:00 a.m. Friday, July 26, 2019 at the Anderson Funeral Home in Glenwood City with Reverend Greg Becker officiating. Burial will be in the Glenwood Cemetery. Friends may call at the funeral home on Thursday, July 25, 2019 from 4 to 8 p.m. and one hour prior to services Friday.