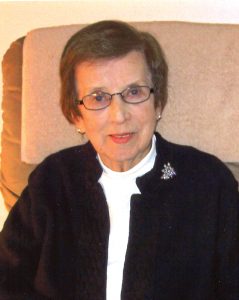 Arleen W. Jeske, age 94 of Glenwood City, WI died Friday July 5, 2019 at her residence in Glenwood City with hospice.
Arleen was born December 27, 1924 in Mondovi, WI. to William and Susie (Skuildum) Rast. She married Robert Jeske on September 25, 1946 at St. Paul’s Lutheran Church in Glenwood City. To this union they were blessed with 3 children: Joseph, John and Janet. Arleen worked for several of the local stores and Myron Lee’s Drug Store for many years. She was active as a leader with the Brownies and as a Sunday School teacher for many years.
Arleen is preceded in death by her husband Robert, parents, brother Roger Rast and sister Lorraine.
Arleen is survived by her 3 children, Joseph (Barb) Jeske of CO., John (Rhonda) Jeske of Amery, WI. and Janet Jeske of Eau Claire, WI. 11 Grandchildren and 17 great grandchildren. Brother in law Orville (Louise) Jeske, Sisters in law Diane and Helen Jeske. She is further survived by many nieces, nephews other relatives and friends.
A private service was held at the Anderson Funeral Home in Glenwood City with burial at the Glenwood Cemetery in Glenwood City, WI.