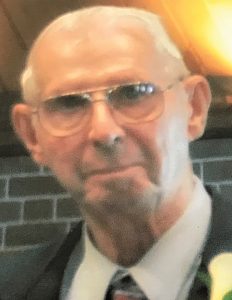 William Hennessy, age 90, passed away peacefully on June 21, 2019 at his home at Memory Care in Amery, Wisconsin, with his wife JoAnn at his side.

Bill was a master of many trades, working road construction, driving trucks, well repair, and home building, but will be most remembered for his $1.00 rib eyes at Hennessy’s Bar and Grill in Forest, WI. He will be missed by his wife JoAnn, and many family and friends. His family would like to thank the staff at Memory Care, and the wonderful girls from St. Croix Hospice.

Mass of Christian Burial will be held at 11 a.m. on Wednesday June 26, 2019 at the Immaculate Conception Catholic Church in New Richmond, WI. Visitation will be held for one hour prior to Mass at the church. Burial at St. Bridget’s Cemetery in Stanton, WI on Thursday June 27, 2019.