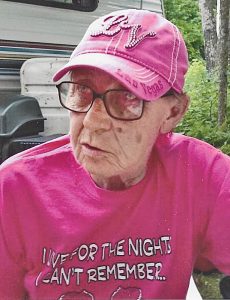 Carlla was born on October 28, 1942 in Forest Township. Her parents were Albert and Linda (Klawitter) Holldorf. Carlla was a farm girl through and through, and as country as you could possibly be. She had 4 siblings, Merwyn, Ione, Duane and Jerry. Carlla tried college life, but found that it wasn’t for her. She enlisted in the U.S. Army and after training in Missouri was sent to Japan in 1963. While in Japan, she met Richard (Dick) Larry Lingerfelt and they were married in Tokyo in 1966. While in the army she attained the rank of Sergeant. Carlla and Dick lived in Detroit, Michigan for three years, where their oldest daughter Carra Kay was born. Another daughter, Kelly Ann, was born in Detroit but passed away shortly after birth. In 1969 Carlla and Dick moved to Glenwood City, WI. Carlla and Dick had two more children, Scott Richard and Barbara Jean. Carlla worked as a school bus driver in Glenwood City before becoming a rural letter carrier with the U.S. Postal Service. While working as a letter carrier, Carlla was on the Glenwood City Council and later, the Municipal Judge. She was also a Wisconsin Hunter’s Safety instructor for over 20 years and volunteered for 12 years on the Glenwood City Ambulance Service.

Carlla is also survived by grandchildren Gabriel, Meredith, Garret and Morgan and many nieces and nephews, Grand-nieces and Grand-nephews, and even a few Great Grand Nieces and Nephews.

Carlla had far too many friends to post here, but they were always a part of the family and very dear to her.

Carlla is preceded in death by her parents, Al and Linda Holldorf, by her mother and father in law, Robbie and Richard Lingerfelt, her daughters Carra and Kelly, her brother Merwyn her niece, Jill DeSmith, and Jill’s daughter Melissa. She is also preceded in death by her sister and brother in law Joyce and Carson Stalker, their son Carson Stalker Jr., and sisters in law Theresa Lingerfelt, and Nancy Kelm Holldorf.

The visitation for Carlla Lingerfelt will be held on Friday, June 28 at Holy Cross Lutheran Church in Glenwood City from 5 p.m. to 8 p.m.

Fellowship and memorial will take place at the church after the graveside service.

Funeral services and arrangements are being performed by Anderson Funeral Home of Glenwood City.

Flowers are provided by Flowers by Nicole of Downing, WI.