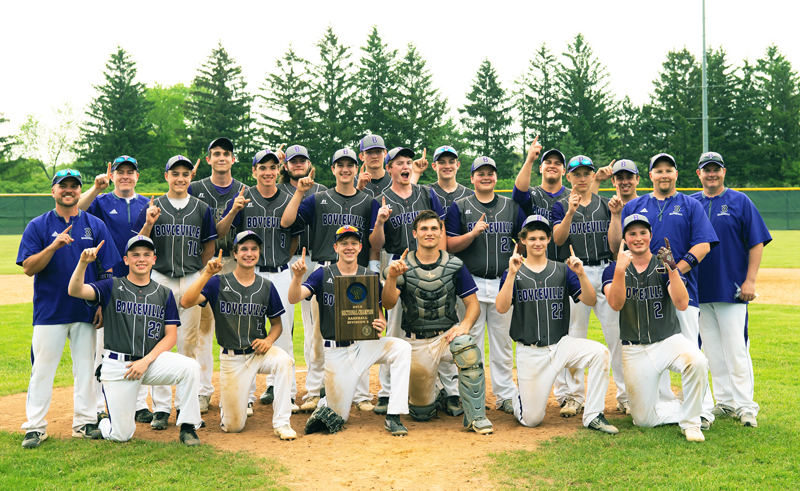 WE ARE #1 — Players and coaches of the Boyceville “Bulldogs” Baseball Team celebrated the sectional championship it won Tuesday evening, June 4 by holding up their index fingers to indicate they were number one. Boyceville captured the WIAA Division 3 Chippewa Falls Sectional title by defeating Neillsville 2-0 in the semifinal and then trounced the Beavers of Cumberland 13-2 in five innings in championship contest to earn the programs first state berth since 2000. —photo by Jess Boesl, Boesl Portrait Design

CHIPPEWA FALLS — The Boyceville Baseball nation is in a state of euphoria after their beloved Bulldogs’ team captured its first sectional championship in 19 years.

Sophomore Connor Sempf pitched a two-hit, complete-game shut out to lead Boyceville to a 2-0 semifinal victory over a good Neillsville squad. In the championship game, the Bulldogs’ broke out their bats as they collected a dozen hits highlighted by sophomore Trett Joles’ fifth-inning grand slam home run and Walker Retz went the distance on the mound, striking out six and allowing just three hits, as Boyceville pelted the Beavers of Cumberland 13-2 in five innings to capture the 2019 WIAA Division 3 Chippewa Falls Sectional crown at Casper Park this past Tuesday, June 4.

The Bulldogs are currently 19-3 as they head to state.

This is just the second time in program history that baseball-rich Boyceville has reached the state championships. The inaugural visit came back in 2000 when the Jeff Riek-coached Bulldogs finished as the Division 3 state runners-up. That squad beat Algoma in the state semifinal before falling to 11-1 to DeSoto in the state champion contest.

This year’s team is scheduled to take on Stratford in the the opening Division 3 state semifinal next Wednesday, June 12 at 1 p.m. on Neuroscience Group Field at Fox Cities Stadium in Grand Chute a suburb of Appleton. The second semifinal features Markesan and Ozaukee. The two semifinal victors will meet at noon the following Day (Thursday, June 13) to decide the state championship.

Startford (20-2) is the champion of the Marawood South Conference. The Tigers beat Nekoosa (1-0), Stevens Point Pacelli (3-0) and Marathon (5-1), who finished second in conference and split with Stratford in the regular season, to win the regional title. Stratford then took down top-seed Iola-Scandinavia 3-2 in the sectional semifinal game and nipped St. Mary Catholic 4-3 to win the Crandon Sectional title.

A complete game story of the Bulldogs sectional tournament along with a preview of their state game will appear in the June 12 issue of the Tribune Press Reporter. 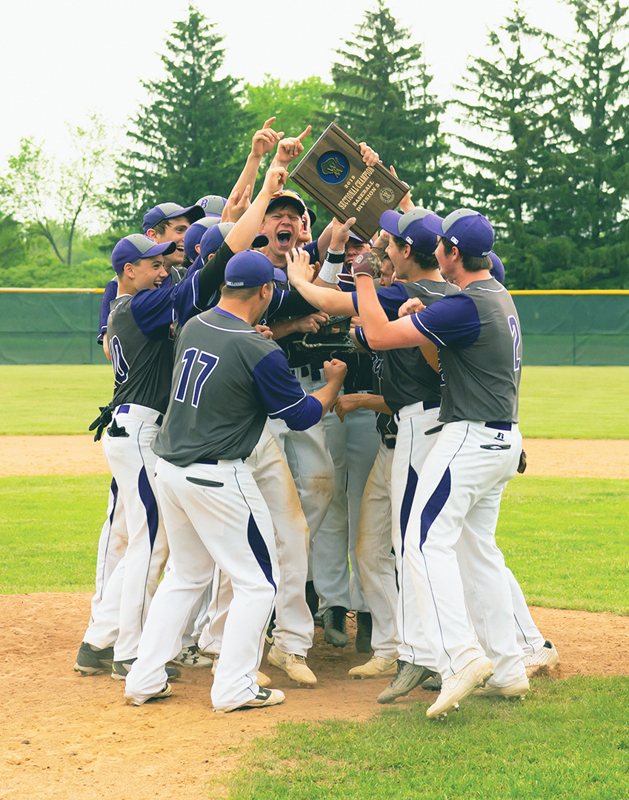