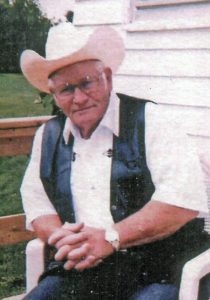 Vernon Burdett Lundquist of Wilson, Wisconsin passed away peacefully at the age of 94 at a private care home in Wyoming Minnesota under the care of his granddaughter, Fallon Hagy. Vernon was born April 6, 1925 in Cherokee, Iowa where he also graduated from high school. He joined the Army in 1944 where he was wounded and received a purple heart and a silver star. He married Cora June Goerndt and had eight children. He later married Mary Dean Keith on October 14, 1978.

Vern had many interests in life and was always on the go. Over the years he farmed in many different areas including cattle, pigs, sheep, and horses. He and his wife Mary Dean raised Arabian horses for many years but his passion in later life was his miniature horses. He enjoyed breeding and showing his miniatures under the name of Midwest Miniatures.

Vern’s other passion was music; specifically, country music. Vern had a band known as Midwest Troubadours for many years and loved to sing, dance, and live life to the fullest.

Vern had a great sense of humor and always loved to hear a new joke. He was a member of the Wilson American Legion and a life member of DAV and the VFW.

Vernon is preceded in death by his parents, brother, 2 sisters, and two children. Vernon is survived by his wife, Mary Dean, brothers, Kermit and Ralph, sister, LaVonn, and eight children, Betty (and Merlyn), Barbara (and Edward), Kaye (and Ron), Terry (and Sharon), Crystal (and Jack), Cheryl (and Marlin), Tyler, and Colleen (and Gary). Vernon also has 19 grandchildren, 40, great-grandchildren, and 8 great-great grandchildren.

Burial service will be held at Fort Snelling National Cemetery on June 12, 2019 at 1:45 pm with full Honor Guard. Assembly area 2, arrival at 1:30 p.m. All are welcome. Vernon will be missed by his family and many friends.