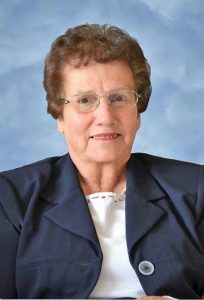 Shirley married Wenzel “Bunny” H. Humpal on June 15, 1949 at St. John the Baptist Catholic Church in Glenwood City and together they raised 5 sons. They operated the family dairy farm in the Boyceville area for more than 40 years. She also assisted with the operations of Bunny’s auctioneering business. After retiring from farming, Shirley worked as a cook’s assistant at the Head Start in Menomonie until retiring in 2009. Shirley and Bunny were  founding members of St. Luke’s Catholic Church in Boyceville. Additionally, Shirley served the community as a school census taker and an active member of the Altar Society and the American Legion Auxiliary. She enjoyed socializing with family and friends, gardening, cooking and taking care of her grandchildren.

Shirley is survived by her sons; Thomas (Judy) of Boyceville, Charles (Darla) of Downing, David (Ranae) of Indianapolis, IN, John (Cindy) of Wheeler and Paul (Kathy) of Stillwater, MN. 9 grandchildren; Kaleb, Alison, Jason, Heidi, Darcy, Daniel, Heather, Jacob and Adam. 16 great grandchildren, and 3 sisters-in-law. She is further survived by many nieces, nephews, other relatives and friends.

Mass of Christian Burial will be held 11:00 a.m. Thursday, May 23, 2019, at St. Luke’s Catholic  Church in Boyceville, WI with Fr. Eric Awortwe-Dadson as celebrant. Burial will be in the Mound Cemetery Downing, WI. Friends may call at the Anderson Funeral Home in Glenwood City on Wednesday May 22, 2019 from 4 to 7 p.m. and one hour prior to services Thursday at the church.

Memorials prefered to the Alzheimer’s Association or donor’s choice.