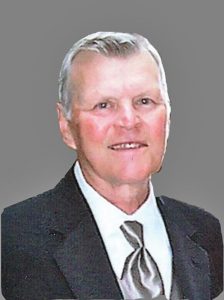 James John Olson, age 86, of Danbury, Wisconsin, was finally relieved of all his pain, suffering and world restraints at 4:15 p.m. on Wednesday, May 2, 2019, with his loving wife Kay by his side.

He was born March 10, 1933, in Menomonie, Wisconsin, to Melvin and Ethel (Ekkie) (Steinmetz) Olson. Jim attended a small country school his elementary years. His family then moved to Colfax, WI, where he graduated from Colfax High School in May of 1950. On February 16, 1952, Jim joined the Air Force. It was there he was trained to be an Aircraft Mechanic during the Korean War. After his honorable discharge from the Air Force in 1956, Jim was hired by North Central Airlines as an Airplane mechanic on June 17, 1957, where he was based in Chicago, IL. It was there he met a little southern cutie – named Kay Williams from Madisonville, KY. Kay was a flight attendant for North Central. Jim won her over by bringing her his homemade meatloaf sandwich, so she would have a good lunch during her flight. She thought it was the best sandwich ever! They say a way to man’s heart is through his stomach…guess that works both ways!

Jim and Kay were married June 24, 1961, in Des Plaines, IL, surrounded by their friends and family. A year later, they moved to Burnsville, MN, where they bought a house and raised their 3 children.

They lived there until Jim retired as an Airplane Mechanic Supervisor from North West Airlines on March 10, 1995. They then moved to the house that they had built in Danbury, WI, where Jim enjoyed hunting, fishing, golfing, running and snowmobiling. They enjoyed 21 years and 6 months together until Jim suffered a stroke on August 24, 2016. He spent the rest of his days at the Frederic Nursing & Rehab Home in Frederic, WI.

James is preceded in death by his parents, Melvin and Ethel (Ekkie) (Steinmetz).

Funeral Service will be held on Wednesday, May 22, 2019 at Yellow Lake Lutheran Church in Danbury, WI, beginning at 12:00pm with a one hour visitation prior to the service with a lunch to follow. The burial will be held at Fort Snelling National Cemetery at a later date.

In lieu of flowers, memorial donations may be sent to the Burnett County Humane Society.

The family wishes to extend special thanks to the Frederic Nursing and Rehab Facility for their professional and compassionate care they provided.

Arrangements have been entrusted to Swedberg-Taylor Funeral Home in Webster, WI. Online condolences may be expressed at www.swedberg-taylor.com