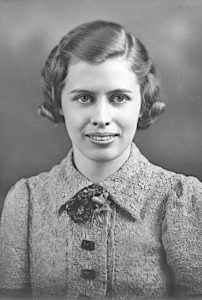 Orris Loraine Peck was born November 11, 1916 at Hillsdale, WI, the daughter of George and Tilda (Flygstad) Peck. In 1922 they moved to a farm 1 mile north of Boyceville, WI. Loraine graduated from Boyceville High School in 1935, she went on to graduate from the Dunn County Normal School in 1937. She taught at Pleasant Hill, Pershing and Midway rural schools. She lived on the Peck farm until her marriage to Percy Blodgett on December 28, 1942. She joined Percy at Granville, OH after school was out in 1943. Franklin was born there, while Percy was stationed at Denison University. Percy was honorably discharged in October 1945. They returned to Boyceville and they moved to the farm in the corner of Hay River Township in March 1946. Ann, Beth, and Earl were born while they lived on the farm. Loraine continued her education and graduated from the University of Wisconsin at River Falls in 1968. She taught 3 grades at Plainview for 3 years and substituted in the Boyceville Community Schools for many years. Loraine was the librarian at the Boyceville Public Library for several years before retiring in 1981. She was a member of the United Methodist Church, the American Legion Auxiliary, served as a 4-H leader and was active in other organizations. Percy died July 27,1988. She married Kenneth Grutt on Feb. 3, 1990. Kenneth died Sept 23, 2005. Blessed with a phenomenal memory, she could still recall the excitement on her second birthday, the day the Great War ended. She passed away peacefully in her sleep while in the care of the Glenhaven staff on February 5, 2019 at the age of 102 years.

She was preceded in death by her parents, her husbands, and her sister, Erma Grosshuesch.

A celebration of Loraine’s life will be held 11:00 a.m. Saturday April 27, 2019 at the Boyceville United Methodist Church with Reverends Shannon Mattison and Franklin Blodgett officiating. Interment of cremains will be in the Tiffany Cemetery Boyceville, WI. Friends may call at the church one hour prior to services. Local arrangements by the Anderson Funeral Home Glenwood City, WI.