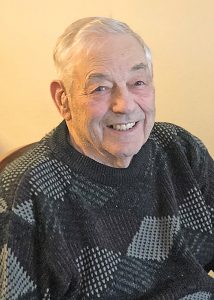 Harold was born October 11, 1932 to Clyde and Leora James. He grew up on a farm south of Downing, WI with his three brothers and four sisters. He graduated from Glenwood City High School in 1950 and worked on a couple dairy farms before serving his country in the United States Navy as a hospital corpsman.

Harold married Alievia Schutz on August 22, 1958 at Grace Bible Church in Boyceville. He worked at Boyceville Feed Mill until they purchased the Schutz home farm in 1967. Harold and Alievia farmed there, raising dairy cattle, chickens, hogs, and limousine beef cattle until they retired. Harold also worked for Bob Shackleton building pole buildings and served 16 years as a supervisor on the Stanton Town Board. After they sold the cattle, Harold enjoyed woodworking and helping Alievia in her flower gardens.

He was preceded in death by his parents Clyde and Leora; two brothers, Wesley and Don; four sisters, Hazel, Genevieve, Mary, Helen; and one daughter, Marilyn (James) Robey.

Visitation was held at 9:30 a.m. Monday, April 22 at Gospel Mission Baptist Church in Knapp, WI, with funeral services following at 11:00. Burial was at Mound Cemetery in Downing with military honors by Harmon – Harris American Legion Post 314. Olson Funeral Home in Menomonie is serving the family.