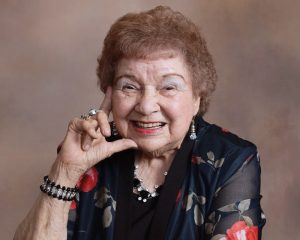 Dolores was born December 2, 1930 to Marie (Draxler) Zielsdorf and Edwin Zielsdorf at Booth Memorial Hospital, St. Paul, MN. She grew up on the farm 2 ½ miles northeast of Glenwood City with her grandfolks, Charles and Eleanor Draxler. Marie worked in St. Paul, coming home every weekend to be with Dolores and her parents. Dolores had a very happy and healthy life and loved the farm and farm work. She loved all the animals and grew up belonging to Brownies, Girl Scouts, 4-H and taking care of a large beautiful yard.

Dolores graduated from Glenwood City High School in 1949 with extra credits earned through two years of home courses in arts through the University of Wisconsin, arranged by Mr. Nelson the Principal. After graduation Dolores worked in Chippewa Falls at Mason Shoe Factory, Walgreens Drug Store, and Frenchy’s Café, then moved to St. Paul. In St. Paul she worked at Montgomery Wards, Armour & Company, and General Mills. Dolores attended Rasmussen Business School and Hellen Steffon’s Air Line & Modeling School. She modeled dresses for Minneapolis Jewish Woman’s Club and for Grants & Neuman’s Department Store. Dolly was in the Miss Minnesota Pageant in 1950 with Armour & Co. as her sponsor, and tutoring and help from BeBe Shoppe Miss Minnesota 1949.

Dolores’ career with Honeywell & Company began in September of 1952 and ended with retirement in November of 1988 as a supervisor with more than 36 years of Service.

She spent four years, 1955-1959, with the Naval Air Service. She worked with Personnel and Tech Training departments at Minneapolis Naval Air Station. Her Boot Camp training was in Bainbridge, Maryland.

Dolores loved to travel and went to almost all of the states in the United States, also Jamaica, Puerto Rico, Panama and several European countries. She traveled in Yugoslavia, Italy, Switzerland, Germany, and Austria. While in Austria, Dolores discovered where her Draxler relatives of her grandfather Charles originally came from: Landstrasse, Austria. These people lived in a neighboring town as Landstrasse was bombed completely in World War II.

Dolly drove many people to places. She took her grandfolks and her mother on different sight seeing trips. Once she drove her grandfather, Charlie and his sister, Caroline Gillis, to California to visit relatives. Another long trip was to take her grandfather and his sister, Anna Draxler to Canada to see the country along the way. Dolly loved to drive and always had riders to and from work in Minneapolis. She also drove people to medical appointments both when she lived in the Twin Cities, and once she retired and came back to Glenwood City to live. Dolly’s car was always taking people to Menomonie, Eau Claire, Baldwin and the Twin Cities.

Dolores married Roy Kramber from Hutchinson, MN, 1954. Divorced in 1955. Married Thomas Waulters from Milwaukee, WI in 1959. Divorced in 1967. Married John J. Donovan from Clontraf, MN in 1972. John (Jack) passed away September 26, 1987, leaving Dolores a widow. It was at this time that she bought the Cleveland House on Oak St. in Glenwood City. She moved in on August 31, 1991, which was the same day her mother, Marie (Draxler) Williams passed away. Dolly had bought the house especially for her Mom, hoping she could enjoy life and see old friends living back in Glenwood City. But cancer took her before this dream could play out. So Dolly rented out the upstairs apartment instead, bringing a friend from Minneapolis to Glenwood City.

Dolly had many hobbies that filled her time when she wasn’t caring for others. She both golfed and bowled in leagues in Minneapolis and also joined a league at Leaker’s in Glenwood City. She loved to dance, she loved to travel, she loved collecting, and she loved antiques. She loved writing, and has several stories she authored in the local history book. Dolly loved her flowers and just loved her beautiful large yard in Glenwood City and making it beautiful for all to enjoy. Dolly just loved life and people. Of course she loved her pets and she fed all the animals outside and had lots of feeders for all kinds of birds. She loved the kitties outside and fed all the strays that came around.

Dolly loved life and her church. She always said, “I thank God for every day I’m alive. Every day is a good day.”

The Booth Memorial Hospital, where Dolores was born was founded by William Booth, who started the Salvation Army and was a second cousin to Dolores’s great grandfather, John Erickson and wife Christina, father to Eleanor, Mrs. Charles Draxler.

A Mass of Christian Burial was held 11:00 a.m. Tuesday, April 23, 2019 at St. John the Baptist Catholic Church in Glenwood City, WI with Fr. John Long as celebrant. Burial will be in the church cemetery. Friends were able to call at the church on Tuesday one hour prior to services.