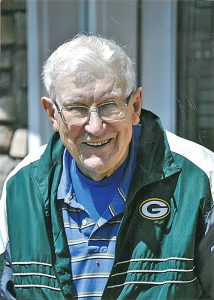 Harlan was born December 6, 1930 in the Twp. of Forest, Wi to Rueben and Emily (Desmith) Tiberg. He attended grade school at the White Birch School and later graduated from the Glenwood City High School in 1948. Harlan farmed alongside his father after high school and later married the love of his life Mary Buck of Ellsworth on June 14, 1954 at St. Francis Catholic Church in Ellsworth, WI. They continued farming where they raised their five children; Diane, Kathy, Rick, Rose and Larry.

Harlan also worked for a time at the Forest Feed Mill for several years. He enjoyed fishing, woodworking, building his cabin, bowling, traveling and being with family. After retiring he enjoyed working for the Hardware Store, driving for Glenwood City Ford, and spending his days on his pontoon fishing at the lake. He also loved taking trips with friends, and traveling to see family.

Mass of Christian Burial will be held 11:00 a.m. Saturday April 13, 2019 at St. John’s Catholic Church with Father John Long as celebrant. Interment of cremains will be in the church cemetery at a later date. Friends may call at the church on Saturday from 9:30 a.m. until time of services. Local arrangements by the Anderson Funeral Home in Glenwood City, WI.