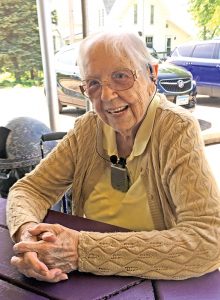 Goldie was born May 7th, 1931 in the Twp. of Hay River, WI to Orin and Isabelle (Mishler) Wakefield. She graduated from Boyceville High school in 1948. She then went on to attend Eau Claire Business college and worked at Northern State Power Company. Goldie married Wayne Bundy in March of 1949, in Red Wing MN. They farmed for a few years in the Irvington area before moving to Minnesota and Illinois, before returning to Wisconsin. During this time, they were blessed with 6 children. Goldie worked as a secretary for Sanna Dairies for 23 years, before retiring in 1991. After moving to Menomonie, she became a member of the Methodist Church and was very active with the United Methodist Women and served as district president for four years. She was called to the Ministry and attended the Garrett Evangelical Theological Seminary in Easton, Il. She became a local pastor in 1998 and served in Ono, Plum City, Maiden Rock, and Knapp Churches until she retired at age 72. She resided with her daughter Patti until moving to Havenwood in 2017.

Funeral services were held at 11:00 a.m. on Monday, April 15th, 2019 at the United Methodist Church in Menomonie, WI. Rev. Wendy Slaback officiated and the burial was in the Clearview Cemetery in Eau Galle, WI. Friends were able to call at the Church on Sunday, April 14th, 2019 from 4-7 p.m., and one hour prior to services Monday.