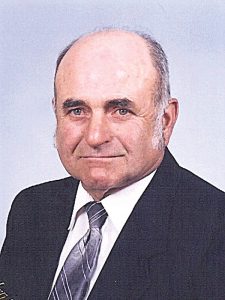 Stanley Sidney Fouks was born on July 6, 1933 on the family farm in Forest Township, the son of Stanley W. & A. Sabena (Knoll) Fouks. He was baptized and confirmed at St. John’s Lutheran Church in Forest, went to Country School there and attended Clear Lake High School. In 1954, Stanley enlisted in the US Army, served in Germany during the Korean Conflict and was honorably discharged in December of 1955. He worked various jobs on the Iron Range for several years before returning to Forest Township. On June 29, 1957, Stanley was married to Lila Sorenson at St. John’s Lutheran Church and made their home in Deer Park. Stan owned and operated his dairy farm and salvage business for many years and together they raised 5 children, Lorraine, Susan, Phyllis, Robert, & Bruce. He was proud of his farm and had one of the first free stall milking parlors in the area.. Stan was known for his ingenuity for creating and repairing structures and mechanical devices on the farm and could fix or build about anything. In his spare time, he enjoyed attending auctions, garage sales, scraping, hunting and fishing. On April 10, 1999, several years after Lila’s death, Stan married Charlotte Tellijohn. They enjoyed many winters in Arizona. Stan was a life long member of St. John’s Lutheran Church in Forest and will be sorely missed by his family and friends.