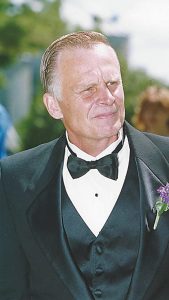 Michael John Rasmussen age 79 of Boyceville, WI, passed away peacefully in his home on March 22, 2019.

Mike was born March 18, 1940 in St. Paul, MN. He attended the  University of MN to earn his doctorate degree in veterinary medicine. While in school, he built houses to help cover college expenses. He built over 150 houses in his lifetime in the Maple Grove/Osseo, MN area. He met Janice Wiggins while smelt fishing in Duluth and they were married three months later on July 16, 1966. Mike decided to get back into farming so he purchased a farm in Boyceville, WI, where he resided up until his death. Along with his farming business he started a family business with his two sons, Grain Masters LLC. His grain bin business thrived and provided many farmers with means of storing and drying grain. He loved the outdoors and spent his life up until his death working hard.

Mike enjoyed sharing his thoughts about his ideas and talking to his family about God and his faith.

Mike will be cremated and his immediate family will gather together at a later date.