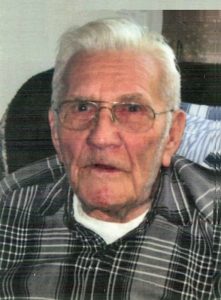 Bud was born May 25, 1924 to Theodore ‘Ted’ and Emma (Moldenhauer) Timm in Cady Township, St. Croix County, Wisconsin. He was baptized and confirmed at St. Matthew’s Lutheran Church, Spring Valley and was a current member of the Wilson Lutheran Church, Wilson, Wisconsin.

Bud was born to a farmer and so was his wife and he stayed a farmer his whole life. He worked for Mark and Oscar Peterson, rural Wilson, for a few years before farming with his dad Ted.

Over the years he would become known as a pretty lucky guy after he was shot in the jaw by a stray bullet while deer hunting with his brother Edwin Timm at Solon Springs. He also broke his neck in a jeep accident. When going ice fishing on Lake Menomin, with 3 other friends, the car he was driving broke through the ice. Luckily all four survived. Bud was the last one to get on the top of the car and jumped to safer ice as the car sunk to the bottom of the lake.

Bud was a sort of trickster/jokester fella, such as on his sister Vivian’s birthday when he wrapped up a gift of road apples, (horse manure), in a basket and gave it to her.

He liked to tease the nurses at Park View the eight years he lived there. For instance, a new social worker came to work at Park View, she told him her name was Polly. He said I’ll remember that name, ‘Polly want a cracker.’ He enjoyed being around people seeing his kids, grandkids and great grandkids. He will surely be missed by all.

He was preceded in death by his wife Arlis; son Mark; great grandchild Cam Stasiek; his parents Ted and Emma; brother Edwin Timm; and sisters Vivian Rice and Eileen Finder.

Other survivors include his sister Lillian (Albert) Frank; sisters-in-law: Joann Johnson and Doris Johnson; brother-in-law Gilbert Rice; and many nieces, nephews, other relatives and friends.

Burial will be in St Michael’s Cemetery, Cady Township, Wisconsin.