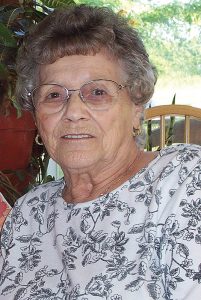 Evelyn “Evie” F. Nelson, age 97, passed away on Sunday, March 17, 2019 at the Colfax Health and Rehabilitation Center in Colfax, Wisconsin.

Evelyn (Myers) Nelson was born November 28, 1921 to John D. and Mary (Cerveni) Myers in a log cabin in Cornell, Wisconsin. She attended several country schools in the Chippewa and Dunn County area.

On September 4, 1942, Evelyn married Emil M. Nelson of Elk Mound in Columbia, S.C. at the Columbia Army Air Base where Emil was stationed in the United States Army Air Force. After Emil’s discharge from the USAAF in 1945, they returned to the Elk Mound area where they started their family. In 1957, they bought and remodeled the Hillside School house in rural Elk Mound as their home.

Evelyn was the go-to lady in the neighborhood for childcare, haircuts, hair setting and clothing alterations. She enjoyed tending to her large vegetable and flower gardens along with her many house plants. Evelyn loved the outdoors, feeding and watching the birds, crocheting, sewing, canning, baking and cooking. No one ever left Evie’s house hungry. Her pride and joy was seeing her grandchildren and great-grandchildren born and passing on her love and knowledge of life to them.

In 2003, Evelyn moved to an apartment in Colfax where she made many new friends as was her nature. In 2012, she entered the Colfax Health and Rehab Center where she resided until her death.

Evelyn is survived by her five daughters; Mary Larson of Colfax, Carol Bushendorf of Colfax, Margaret (Tim) Barstad of Boyceville, Pam (Glenn) Paulus of Colfax and Lori (Craig) Lorenzen of Colfax. She is also survived by fourteen grandchildren and thirty five great-grandchildren, one more due in May, and one great-great-grandson along with many loving nieces and nephews.

A memorial service will be held at 2 p.m. on Saturday, March 30, 2019 at Sampson Funeral Home, 1017 E. Railroad Ave. in Colfax, with Jordan Herrick officiating. Visitation will be held one hour prior to the service. Music will be provided by Jim and Jordan Herrick. A private burial will take place at a later date. Sampson Funeral Home is assisting the family with arrangements.