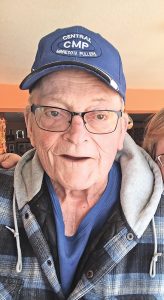 Robert (Bob) Paul Scheidecker, age 77, died on Saturday, February 24, 2019 surrounded by his family. Bob was born on July 8, 1941 to Carl and Avilda (Erickson) Scheidecker and lived on a dairy farm in rural Colfax. After high school, Bob took over the family farm. On June 1, 1963, he married Janice Anderson. Together they had three daughters. They later divorced. On February 14, 1994, he married Cindy Anderson, who had three sons.

Bob enjoyed fishing, bowling, playing Blackjack at the casino, raising Dachshunds and playing cards. You could always tell if he was winning at cards by hearing his loud, infectious laugh. Bob also enjoyed watching the Badgers, Packers, Bucks and Brewers as well as the Twins and Timberwolves. He will be remembered for being a very giving, generous person. He was always there if someone needed a hand.

Bob was most passionate about tractor pulling. In fact, he was instrumental in growing the popularity of the sport in Wisconsin and the Midwest in the 70s and 80s. Although he started by pulling farm stock tractors, he quickly moved into the modified division using his mechanical skills to design and build multiple pulling tractors from the ground up. This tractor pulling fever has been passed on to his grandsons, Blaine and Andrew Asleson. He will be most remembered for creating the “Piston Packin’ Mama”–a modified pulling tractor using a 2,000 horse power V-12 Allison engine used in World War II airplanes and PT-boats.

He was preceded in death by his parents, brothers Richard and Rolland, sister Allene, and stepson, Nick Anderson.

We would like to thank Lakeview Medical Center Hospice for their loving and compassionate care for Bob and the family.