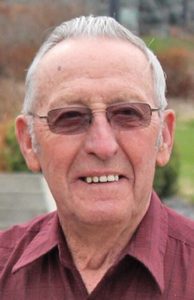 Edward Wallace Siebert, Jr., age 83, of Ridgeland, WI died Wednesday, February 20th, 2019 at his home. He was born August 10th, 1935 to Edward and Esther (Lien) Siebert in the Town of Sheridan on the home farm. He was born and raised in the Ridgeland area his whole life. Edward attended Little Beaver School and graduated from Prairie Farm High School in 1952. He was baptized and confirmed at St. Paul’s Evangelical Lutheran Church in Ridgeland WI. In 1957, he was married to Marion Anderson in Prairie Farm & they lived and farmed in the Ridgeland area his whole life. Ed was a quick-witted man who loved life, his children, his grandchildren, great grand-daughter: Shnookums, and especially his bride, Marion. Wherever Ed went, he knew someone. If he didn’t, he made a new friend real quick. He had the ability to make everyone he called his friend feel special. If you were talking to Ed, whether in person or on the phone, you could always plan on it being a half hour conversation. The man LOVED to talk. Ed’s laugh was infectious and could easily be picked out in a crowd. Ed was an avid hunter and fisherman. In his spare time, you could find him at his children’s and grandchildren’s sporting events. He was a lover of dart ball, playing for 69 years. He played in all 65 Prairie Farm Dartball Tournaments. He could be seen hooting and hollering along with the “young bucks” while throwing darts. Grandpa G loved to tell stories and was often reminded when teasing his grandchildren that he better be telling them the truth because everything he said to the kids was “gospel.” His family is comforted in knowing Ed’s love for his Savior, Jesus Christ, which inspires us all to want to be a better person. Ed was one of the good guys in life you don’t forget about and as Cousin Cody said, “there will never be another man like Ed.”  He was truly one of a kind.

Funeral Services was 11:00 a.m. on Monday, February 25th at St. Paul’s Ev. Lutheran Church in the Town of Prairie Farm with Rev. Roger Quant officiating & interment followed in the church cemetery.  Friends may call from 4-8 p.m. Sunday at the Rausch-Lundeen Funeral Home in Dallas and also for the hour prior to services at the church on Monday.  Arrangements are with Rausch-Lundeen Funeral Homes, Dallas & Cameron.