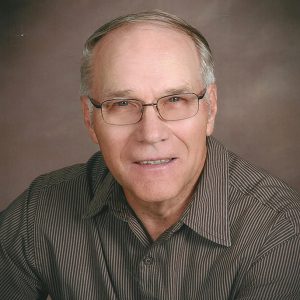 William (Butch) Mathews IV completed his journey from dementia with Lewy Bodies with Parkinson’s on February 6, 2019 at Azura Memory Care in Eau Claire.

Butch was born on December 31, 1940, a “cold winter night”, on the family farm in the town of Tainter, Wisconsin, the son of William A. III and Fern (Rogge) Mathews. He attended Knapp Settlement grade school and graduated from Colfax High School in 1959. A week later he began his 11 year employment with Arthur Overguard Construction Co. as they were building Interstate 94 in the Menomonie area. He then worked for Dunn Co Hwy Dept. for 32 years retiring in 2002. Doing the best job possible was important to Butch.

On December 1, 1962 he married Mary Ellen Martinson. Together they raised two children, Karla and Heath. He was very proud of his children and grandchildren.

He was a member of Colfax Lutheran Church, Hillgrove Cemetery Board, Union of Operating Engineers, AFSCME Union, Colfax Snodrifters and the Colfax Sportsman’s Club.

One summer he coached Little League and got a kick out of the kids approaching him years later after all grown up and challenging him to remember who they were! He also enjoyed embarrassing his family with things that he would create and build such as his “camper”, his deer shack, his bird feeder and his canoe trailer.

He is preceded in death by his parents, his younger brothers, Richard and Lynn, in-laws, Marlow Martinson, Ellen Martinson Isakson and step-father-in law, Merrill Isakson.

Visitation will be from 4pm to 7pm on Friday, February 15, 2019 at Sampson Funeral Home, 1017 Railroad Avenue, Colfax, WI and again one hour prior to the memorial service. A Memorial Service will be held at 11am on Saturday, February 16, 2019 at Colfax Lutheran Church, 600 Balsam St., Colfax, WI with Pastor Leslie Walck, PHD, officiating. Burial will be in Hill Grove Cemetery in the spring.

In lieu of flowers the family requests memorials to Colfax Lutheran Church or Hill Grove Cemetery.

The family wishes to thank the Village of Colfax and our neighbors who looked out for him during the early days of his journey with dementia. And to Visiting Angels, our Azura family: staff, residents and spouses; Mayo Hospice, his friends who visited and who asked about him. Pastor Walck for his visits, our church family, and our family for their help and concern.

Sampson Funeral Home of Colfax is assisting the family. Online condolences may be shared at www.sampsonfuneralhome.com.