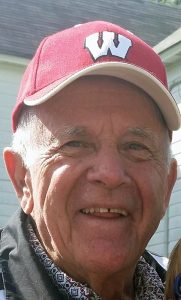 Clyde Gilbert Prince passed away on February 8, 2019 in Eau Claire, Wisconsin. He was born on March 3, 1933 to Gilbert and Leona (Meinen) Prince. He was raised on a farm in Cooks Valley, where he attended the St. John Catholic Church Grade School. Clyde loved to tell how he was the smartest and best looking boy in his class, among 8 girls. Clyde married Rona Don Roth in 1961. They later divorced.

Clyde was most known for his love of sports. To this day he could recall all of his moments as a star athlete at Colfax High School, where he graduated in 1951. Clyde was the quarterback of the football team, guard on the basketball team and a talented pitcher. He always talked highly of his coaches Ken Poppy and Dude Kittle and attributed his success to their leadership and strict coaching. After graduation, he joined the US Army and was stationed in Anchorage, Alaska. While there, he was able to bowl and play a lot of baseball.

Following his return from his duty in the Army, Clyde continued his love of the game. He and his brothers are still known to many as “The Prince Boys” who played baseball in many area leagues in the Chippewa Valley. Clyde did a lot of pitching and was a good outfielder. One of his fondest memories was going up against Bud Grant who pitched for Osceola at the time, and defeating them. Clyde carried his passion for sports into a lifelong career of refereeing and umpiring, a legacy his sons continue to carry on today. Clyde and his brother Tom were also very instrumental in the development of a softball park in the village of Colfax.

During his lifetime, Clyde worked several jobs including working at the Inland Lumber Company in town and tending bar, and also served on the fire department.  He was most proud of his job of 19 years at Uniroyal where he built tires and became an instructor. This experience led him to spend 6 months in China teaching the Chinese how to build tires. In retirement Clyde loved driving routes for the CTL, mowing at the Whitetail Golf Course and was also known as the “break room supervisor” at Kyle’s Market.

One of Clyde’s favorite times every year was the two weeks he would spend with his family and friends at “The Thornapple Hilton” deer hunting cabin in Winter, WI. While Clyde was a good hunter, he mostly enjoyed the numerous games of euchre and sheepshead he played with the guys.

For several years Clyde did not miss a home sporting event. He would arrive at the basketball games very early to get his front and center spot. He was quite proud to be able to watch his grandchildren play there.  Clyde also loved watching the Packer games with his daughter, Joni, and rarely missed a Badger or Brewer game on TV.

Clyde loved to visit with anyone who would listen, recall old times and spend time with his family. He enjoyed many meals at Mom’s Restaurant, reading the paper, dancing and listening to polka music. Clyde was a true gentleman and will be deeply missed by his family and friends.

He was preceded in death by his parents:  Gilbert and Leona; brothers:  Denis, Tom and Rollie Prince; sister, Pat Sumstad; nephew: Terry Prince; as well as one grandson: Mitchell Prince.

There will be a time of gathering at the Viking Bowl in Colfax on Sunday, February 17, 2019 from 11:00 AM – 3:00 PM with a memorial service at 1:00 PM.  Online condolences may be expressed at olsonfuneralhomebloom