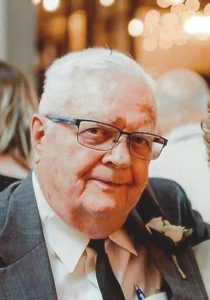 It has pleased Almighty God to summon out of this vale of tears to HImself in heaven, from the Church Militant to the Church Triumphant, the soul of Rev. Louis C. Kerestes on January 30, 2019 at the age of 87 years.

Louis was born in March 21, 1931 in Streator IL. He was the son of John Kerestes and Pauline (Plesko) Kerestes, and was one of 4 children.  He was baptized by Rev. John Daniel, in the Name of the Triune God in the Sacrament of Holy Baptism at Trinity Lutheran Church in Streator, Il on April 12, 1931.  He renewed his baptismal vows in the rite of Confirmation at Trinity Lutheran Church, Streator, IL on April 2, 1944, promising faithfulness to his Savior unto death.

Louis was united in marriage with Eleanor Jean Leis on June 17, 1951 at St Paul’s Lutheran Church in Streator, Il. Their marriage was blessed with 5 children.

He began studying for the ministry in 1955, graduating from Concordia Seminary, Springfield, IL in 1960 and receiving a Bachelor of Divinity degree.  He was ordained to the Lutheran Ministry on June 19, 1960 at Trinity Lutheran Church in Streator IL, after receiving his first call into the ministry of LCMS.

After retirement, Louis married Joan B. Kastel on April 21, 2001 and lived in Stanley, WI. Joan died on March 5, 2018. Louis lived the last year of his life in Mukwonago, WI with his daughter Angie and her husband.

He was preceded in death by his parents, a daughter, wife, Eleanor and wife, Joan.

Funeral services were held 2:00 p.m. Monday, February 4, 2019 at Holy Trinity Lutheran Church Boyceville, WI. with Reverend Curtis Brooks officiating. Friends were able to call at the church on Monday from 12 to 2 p.m.

The mortal remains will be laid to rest in Riverview Cemetery, Streator, IL there to await the coming of the Lord Jesus Christ and the resurrection on the last day.