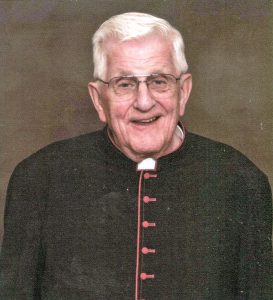 Msgr. Ed retired in 1998, at the age of 70 and began working as a priest in four Indian Reservations near Phoenix, AZ, and in a Spanish speaking parish in Tempe, AZ.  He was also appointed School Chaplain of St. Peter Indian Mission School in 2006. Msgr. Ed was invested as a Monsignor in the Diocese of Superior on June 27, 2010. In 2011, Msgr. Ed wrote some personal comments which are as follows:

Before I was ordained, I never imagined that this would be such a happy life and it has been consistently so. I have always been welcomed as a priest and friend whether it was with sisters and other teachers with whom I worked in catholic education, with many people of Cathedral Parish or with the little children of St. Peter Mission School out here in the desert of Arizona.

Since I have been in Arizona I look forward each summer to “going home ”to visit family members, priests, Cathedral parishioners and others but after a few weeks it is always good to get back to the Native American People, especially the little children at St. Peter Mission School with such faith, hope, and love.

Whenever I speak to people about the future of the Church, I always do so with great confidence and hope.  I often speak to them about the priests with whom I worked and served at the Cathedral. They were very prayerful, gifted, committed young men. I learned much from them and I hope they learned from me.  They are all doing great work in our Diocese; they are the future of the Church. It’s in good hands. I have also been so impressed with the faith of the people whom I was asked to serve. It is, among so many of them, a very strong, wise and consistent faith.  They are the best proof that the spirit is truly alive in the Church today.

Msgr. Ed is survived by his sister, Jean Jackelen; brother, William Meulemans and many nieces, nephews and many brothers and sisters in Christ.

The Lenroot-Maetzold Funeral Home, 1209 E. 5th Street, Superior is assisting the family with arrangements. To leave an online condolence or to sign the guestbook, please visit www.lenroot-maetzold.com.