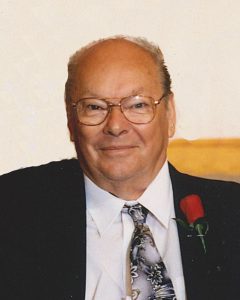 Murrell Edward Schultz, age 89 of Knapp, passed away on Thursday, December 27, 2018 at the American Lutheran Home in Menomonie.

Murrell was born on March 17, 1929 in the Township of Stanton, Dunn County to Fred and Gladys (Nyer) Schultz. He graduated from Boyceville High School in 1947. On August 20,1950 Murrell married Donna Platson in Hersey.

Murrell had a multitude of interests and abilities. He was a self-employed television/radio repair man for nearly 20 years before becoming a cattle buyer. He was an avid sports fan of many Wisconsin teams including Boyceville Bulldogs and Green Bay Packers. He enjoyed gardening, hunting, fishing, and spending time outdoors. He loved playing games and most importantly, spending time with family.

He was preceded in death by his parents, sisters Luella Bodsberg and Delores Hurtgen and an infant brother.

Funeral Services will be held at 1:00 p.m. Wednesday, January 2, 2018 at Gospel Mission Baptist Church in Knapp. Burial will take place at Teegarden Cemetery, Township of Lucas, Dunn County. Visitation will be from 11:00 a.m. until 1:00 p.m. at the church. A luncheon will follow the services at the Knapp Hall.