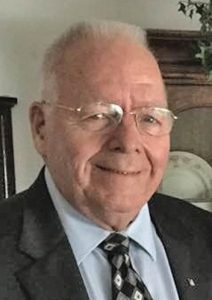 Bryce James Russell, 83, Rockford, IL passed away Sunday, December 23, 2018, at OSF St. Anthony Medical Center.  He was born July 30, 1935, in Colfax, WI, the son of George and Astrid (Steen) Russell. Bryce was a veteran of the Navy, serving from 1954 to 1958. He married Anna “Ann” McNeal in Rockford on March 25, 1972. Bryce was the vice president and an engineer at Rockford Sanitary Systems retiring in 2013. He was a long time member of Salem Lutheran Church where he was active in many areas of the church.  He was an active member and past president of the Kiwanis Club of Rockford, an avid Packer fan, enjoyed woodworking, and was active in the Boy Scouts for over 50 years serving on many committees including past Scoutmaster of Troop 181. Bryce loved spending time with his family and was always involved in his children’s activities.

Funeral services was held at 10:00 A.M. on Saturday, December 29, 2018, at Salem Lutheran Church, 1629 S. 6th St. Rockford, with Reverend Bill Dahlberg and Reverend Christine McNeal co- officiating. Burial in Highland Garden of Memories in Belvidere. Visitation was from 4:00 P.M. until 7:00 P.M. on Friday, December 28, 2018, at Salem Lutheran Church and again from 9:00 A.M. until 9:45 A.M. on Saturday at the church. Memorials may be made to the church or to the Kiwanis Club of Rockford. Arrangements by Fitzgerald Funeral Home and Crematory, Mulford Chapel, 1860 S. Mulford Rd. Rockford. Share online condolences at www.fitzgeraldfh.com.  GO Pack GO!