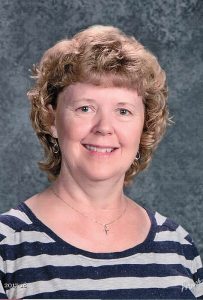 Sally was born on August 12, 1965 in Mondovi. She was the daughter of Doris (Johnson) and LeRoy Nelson. Sally grew up in Colfax and graduated from Colfax High School in 1984. After high school, Sally attended Chippewa Valley Technical College in Eau Claire and graduated with an Associate’s Degree in data entry. Sally married Robert Tschumperlin on September 2, 1989 in Colfax. After marriage, Sally and Bob lived in Ellsworth and rural Plum City for several years before moving to Durand in 1995. Sally took a job at Security National Bank in Durand as a teller and in 1999 she became a Para Professional at the School District of Durand, where she was still employed.

Sally enjoyed traveling, wine-tasting, garage sales and playing games on her iPad. She also liked sewing, camping, making lefsa for the family and in recent years, Sally enjoyed going on motorcycle rides. Most of all, Sally loved spending time with her family and friends.

Funeral Services will be 11:00 AM Thursday, December 20, 2018 at St. John Lutheran Church in Durand with Rev. Daniel Pfaffe officiating. Burial will be in the Evanger Lutheran Church Cemetery-Lookout, rural Independence. Visitation will be from 4:00PM-8:00PM Wednesday at the Rhiel Funeral Home in Durand and one hour prior to services at the church on Thursday.

Condolences may be made online at www.rhielfuneralhome.com.