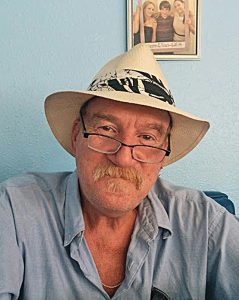 Paul Jerome Brandt age 58 of Waldport, Oregon, passed away at Corvallis Manor, Corvallis, OR on December 9, 2018, after a short battle with liver failure.

Paul was born March 10, 1960 in New Richmond, WI, to Harold Brandt., Jr., and Betty (Nelson) Brandt. He grew up on the family farm south of Glenwood City and graduated from Glenwood City High School in 1978.

He married Cheryl Kelly and they had two children, Maxwell and Cassandra. They were later divorced. Paul spent the last 15 years of his life with his partner Debra Rea.

Paul’s life was full of music and the arts. He was a multi-instrumentalist, wrote music and was in several bands throughout the years. He also wrote a children’s book and a play. Paul loved the ocean and life on the coast. He was self-employed as a carpenter his entire adult life, a trade in which he excelled.

He was preceded in death by his parents and nephew Jacob Brandt.

Paul will be buried in Oakwood Cemetery, Hersey, WI, at a later date.