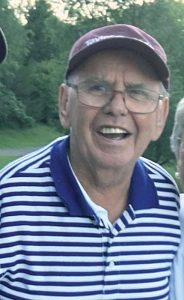 Kenneth Close, 80, of Roberts, passed away peacefully & surrounded by family on Tuesday, December 11 at Christian Community Home in Hudson. Ken was born on November 16, 1938 in Eau Claire, WI to parents Stephen & Mildred (Brown) Close. He graduated from Colfax High School in 1957, & married his wife, Joan Lorraine (Olson) the next spring on March 8, 1958 in Colfax, WI. Together they shared 60 years of love & happiness, and raised four children; Thomas, Shelly, Kenneth Jr, & Jodi. Kenneth worked most of his life in the printing industry.  He was with West Publishing for 27 years before joining his wife in their family typesetting business, Close Forms Design.  In 1999 Kenneth retired to allow him time to enjoy the things he loved, like traveling with his lovely wife & spending their winters in Texas. He also enjoyed camping & everything that came with it, including fishing, four-wheeling, snowmobiling, & spending nights in his RV. When Kenneth wasn’t camping, he could be found golfing, bowling, dancing, or cheering on his grandkids at their sporting events. He loved spending time with his family; & they will remember him fondly for his competitive spirit & caring nature.

A Visitation for Ken was held on Sunday, December 16, from 2-5:00 PM at O’Connell Family Funeral Home of Hudson, WI. A Funeral Service was held on Monday, December 17, at 11:00 AM with a short visitation one-hour prior at Cross Lutheran Church of Roberts, WI. Memorials preferred to the discretion of the family.