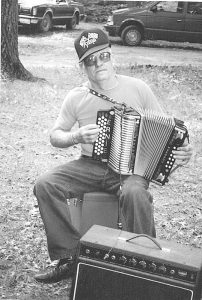 Ernest C. Kiekhoefer passed away on December 12, 2018 at the Glenhaven Nursing Home in Glenwood City, WI. He was born February 4, 1933 in Somerset. WI. The last to be born to Herman and Ada (Rosenow) Kiekhoefer. He married Mary J. Clemmens on October 20, 1951. He was a Farmer almost his whole life, until later years when he worked at New Richmond Industries and a short time at Federal Foam, before retiring.

Ernie enjoyed playing the concertina along with guitar, drums, and a harmonica. He also enjoyed going fishing, hunting, gardening and tinkering with lawn mowers, or anything with a small engine.

He was a very crafty man, making anything from wooden windmills to baby cradles, and rocking horses for his first born great-grandchildren. He was a gentle man in nature and a caring and a giving person. His laugh and smile was infectious, he always made you smile or laugh at his jokes and his music.

There will be a private Celebration of Life and burial in the spring, at the Greenwood Cemetery in Emerald WI.