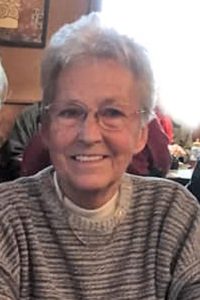 Annette Marie Waldon, age 67, of Knapp, WI passed away at her home on December 6, 2018 with her daughter by her side.

Annette was born May 3, 1951 in Glenwood City, WI to Harris and Pearl (Coleman) Booth at the Sachsenmaier Maternity Home. She graduated from the Glenwood City High School in 1969 and moved to St. Paul, MN where she met and married Milt Waldon. They returned to back to Glenwood City and lived in her family home. They were married until 2001.

Annette worked at McMillian Electric in Woodville for 35 years, retiring in January of 2015. She loved camping and working at the Osseo Campgrounds. She also enjoyed canoeing, tubing and working in her flower and vegetable gardens and her birds.

Annette is preceded in death by her parents, brothers Harris Jr. and Steven Booth, brother-in-law Wayne Klatt and significant other Tom Quinn.

Celebration of life service will be held on Friday, January 4, 2018 from 4 to 7 p.m. at the Glenwood City Community Center. Local arrangements by the Anderson Funeral Home in Glenwood City, WI.