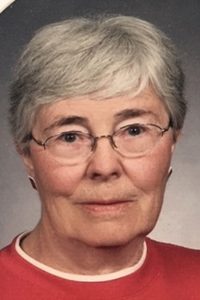 After a long battle with Alzheimer’s Disease, Joyce Lorraine (Tryggestad) Swenson passed away to be with her Lord and family in Heaven on Saturday, December 1, 2018, at the age of 92, at Pioneer Health and Rehabilitation in Prairie Farm, WI.

Joyce was born on May 28, 1926, the daughter of Otto and Olga (Knutson) Tryggestad on the family farm in the township of Jefferson, Vernon County, WI. At the age of 12 she and her parents moved to Baxterville, WI where Otto and Olga farmed. After grade school in Baxterville, she attended and graduated in 1944 from Dunn County Agricultural and Normal School (Aggie), Menomonie, WI. She enrolled in the Luther Hospital School of Nursing in Eau Claire and graduated after four years as a Registered Nurse in 1948. She enlisted as a Cadet in the Army Nursing Corps but never served in active duty because the war had ended. While at a dance in Wheeler, WI, she met and later married Philip Bygd on February 14, 1951 and lived for the most part in Prairie Farm. They had four children: Terry, Dennis, Sherman and Valerie. They were divorced in 1976. Again, also at a dance, she met Kenneth Swenson and on September 29, 1979, they were married and lived at Kenny’s home in Connorsville, WI. Later, after Kenny’s passing in 1998, Joyce moved back to Prairie Farm to an apartment in 2003. She lived there until going into the nursing home on January 12, 2010, where she lived until the time of her death, December 1, 2018. Joyce worked as a nurse in the Menomonie and Rice Lake hospitals, for Dr. Roemhild at the Prairie Farm Clinic, Prairie Farm School systems, the Pioneer Nursing Home in Prairie Farm where she was Director of Nursing and at the Glenhaven Nursing Home in Glenwood City until the time of her retirement. Joyce was a very kind and giving person, even at the sacrifice of her own time or needs. She felt it was her calling as well as her family’s to be a good Christian and to help others in time of need. She loved to volunteer her time to civic and church activities or help out a neighbor or someone in town who needed helping. As a dedicated and willingly voluntary nurse, she was often called on during the time the village had no clinic or doctor in town for things like assisting with pain medication to a sick or dying person, whether it be day or night. In her spare time Joyce liked to garden and to can what she grew. During holidays she liked to make lefse and cook meals for the family. Joyce also liked to be involved with many church activities but most of all enjoyed singing in the church choir. She was a member of the Grace Lutheran Church while living in Connorsville and the United Lutheran Church when living in Prairie Farm and served on circles of both churches. The family of Joyce L. Swenson would like to extend our thanks and gratitude to family and friends who have participated in helping us get through this time of sorrow and mourning. Mom would be grateful. We would like to also extend sincere and grateful thanks to all the staff, both past and present, at the Pioneer Health and Rehabilitation for all of the love and compassion they have shown Mom for the past eight years. She would be so proud of you all.

Family, friends and others whose lives Joyce touched are invited to the United Lutheran Church in Prairie Farm for visitation at 12:30 PM to the time of service at 1:30 PM on Sunday, December 16, 2018, to reminisce, grieve, support each other and celebrate the life of Mom, Joyce L. Swenson. You are also invited to share a lunch at the church following the service. Interment of ashes will be in the spring with a private graveside service for the family at Hay River Lutheran Church Cemetery in the town of Hay River, Dunn County, WI. Arrangements are with Rausch-Lundeen Funeral Homes, Dallas & Cameron.