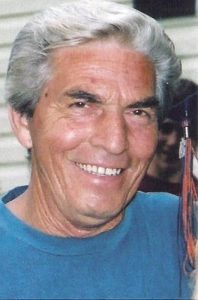 Thomas Edward Quinn, age 76 passed away on Monday, November 26, 2018, surrounded by his family.

He was born on July 6, 1942, in Knapp, WI on the family farm to William Sr. and Golden Quinn, 1 of 8 children. Tom grew up in the Knapp area and graduated from Glenwood City High School. He worked construction before taking over the family farm in 1972. While farming he worked at Andersen Windows in Bayport, MN for 30 years before retiring in 2006. He was always working on a vehicle or doing a woodwork project for the family in the workshop he built. When he wasn’t working on a vehicle or wood project, he would supervise the work being completed on the farm and was never shy about giving advice on how it could be done better. He displayed an infectious love of life and enjoyed being social. He loved the time he had with his friends over coffee and an occasional beer during happy hour. His retirement project to restore his 1959 Ford Fairlane hardtop retractable convertible was accomplished with lots of hard work and patience. It portrayed his demeanor of hard work and the extra effort he put in everything he accomplished. His laugh and smile will be greatly missed by his family and friends. We all wish we could just have one more with you!

He was preceded in death by his parents William Sr. and Golden Quinn, brother Bud Quinn, and sister Gloria Quinn.

A Celebration of Life service will be held on Friday, December 7, 2018, at the Community Center in Glenwood City from 1 to 7 PM.